Arboretum Valley is a number of interconnected railway stations and dioramas that hide tracks. It can and is usually run as a totally vanilla layout, but having a wicked sense of fun, strange and weird things can pop up, and do.
We have a large loft, and I bought my husband a Hornby transept one xmas, it languished for a year or two after a quick play, but when we extended and had a nice large loft he bought it out, and things went from there.Originally it was his baby, but he asked me to help with some scenic detail, and started to share his passion teaching me about the eras, the types of locos etc., teaching to stop calling them trains

We came a cross Skaledale 00 and as our layout was going to be big those resin buildings seemed a good quick fix for filling out the layout, we considered the likes of P4 but decided that for the size we were going for it would be mean making track forever, so compromised on Peco 75. The layout out is fully DCC.Some of the skaledale buildings in the early days had heir origins on the box, and we really like one of he stations, thinking it was generic, but it turned out that another modeller pointed out we had bought Goathland, and once we knew that we remodelled that area twice to get it to a reasonable facsimile, over the years I have come across other Goathland modellers, and holiday makers who help with ideas and photographs.
We also have other stations including Kalborough which is our largest station. Much of the set up reflects either the 1960s or later. The 1960s influence is also due to Goathland station, because I loved watching Heartbeat the TV series and once we new Goathland station we saw it used for filmgoing their, and became aware that the village is used for filming also, and found you could buy Aidensfield Arms and Scripps garage two buildings in the village. It has also been used for filing Harry Potter and occasionally the infamous Hogwarts Express runs there, sometime in the future I may make one with the correct engine, but so far it is just the Hornby commercial one.
Anyway to the pictures.I'll start with some of the better pictures first,photographin isa passion of mine and capturing the layout trying to make it look realistic is something i strive for,I use an iPad which allows me to see the picture and choose the focus, which gives me enormous opportunity to soft focus much of anything that screams model, helping with the illusion.I often see other layouts that look superb and which i could photograph them. The loft has several vellum windows which allows natural light and therefore natural shadows, a godsend when trying to trick the viewer.

9215 The station carpark and the weigh bridge.

7656 The rear carpark, the bought resin buildings have had some light weathering, and a sign or advert or two added, but otherwise the look is all down to Hornby.

8477 Greengrass, sheep wandering around the village is usual

I hope this wets your appetites

I will show some of the other areas soon, and then show how I updated some of the railway and scenic items soon

Absolutely delightful. Magical detail. Thank you for sharing.
Most people are shocked when they find out how bad I am as an electrician
Top

Recognized the setting straight away. Very well done.
I’m not a complete idiot, some pieces are missing.

Speechless - Absolutely stunning attention to detail.
And the Lord said unto John “Come forth and receive eternal life”, but John came fifth and won a toaster!
Top

Thank you for the really nice comments.
Much of the modelling results I achieve are totally enhanced by careful photography. I usually go for low angles reflecting the eyes of a model on the layout, it takes a vantage of how our brains work, then you can focus on the better detail and hopefully blur detail our brains will automatically accept thus making the photo more believable.
This is usually enhanced thanks to the fact my loft has 5 vellum windows north and south and one west allowing real light to give shadows and lighting effects that are realistic.
I also carefully place figures, taking best advantage of their aspects, I do not yet have any 3D printed figures, but they also serious help. I turn figures to show good profiles, or good faces, and turn figures to their backs ig there models face is incapable of looking human, and I also repaint and even add detailing to attempt to make the figure look better, and then hopefully place it at enough of a distance to photographic it to advantage, and use 00 in the foreground (sometimes larger figures) and then H0 figures further away. H0 figures can be used to infer teenagers as well.

0480 same figure used with another H0 figure nearby

0479 two copies of the same figure, one has greenstuff on it to make the shorts into a skirt.These are used to represent Gina from Heartbeat TV series

Do they look like the real characters? No. But, the clothing can give just a touch of emphasis to enhance the illusion.

5596 even light on a figures face can enhance the effect 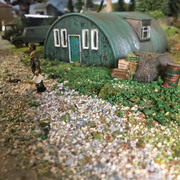 If a figure has a thick base, hide it behind car, if you want a specific look and there is not model out there, can you make it yourself? Even clothing it.
2129 tissue cut, and shaped

2137 and painted, be prepared to solve problems, and experiment, what's the worst that can happen it does not work? It turns out to be practise to improve skills?

Super model, Jaz. Love the details. Is that Inspector Morse's Jag in the last picture?

Yes indeed Inspector Morses jaguar, I have bought loads of vehicles that I can identify as belonging to TV series or films. And I roll them out whenever I can get away with it. I also sneak all sorts of other less usual items

0125 it was a quick paint job, far from the best, but despite that it gets a lot of attention

by appealing to peoples memories especially comedies you can get way with pure murder, hence the Inspector Morse

0710 no photographic trickery, a model, the horrible base is hidden

9413 now if you think this is the Saturday morning version you would be wrong....

2542 a short and fat Batman? A tall and lanky Robin? Only a fool will not realise the horses in that yellow Robin

as for the Batmobile it is not the correct scale...or is it? Because I defy anyone to proof it is not 00 LMAO

0262 The Good, The Bad and the Ugly, well some models are better than others 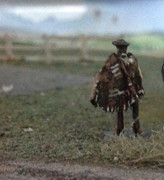 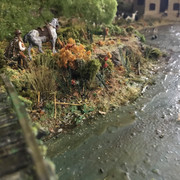 I have plenty of others, but I will leave some for another time, including my beloved Daleks!
Top

Beautifully done. The fellow in the sarape is instantly recognizable.
Top

Beautifully done and they all brought a smile to my face.

Trouble is I will now get pestered by my daughter to have Scooby Doo and Velma on my layout somewhere. Although I must admit to already having the Scooby Doo Class 128 loco

And the Lord said unto John “Come forth and receive eternal life”, but John came fifth and won a toaster!
Top
Post Reply
49 posts

Users browsing this forum: No registered users and 3 guests