A place to show what you are building, altering, kit bashing etc.
Post Reply
23 posts

The Trix Dump Car (which it does sound like) came as part of a very clever set. The set included the dump car plus a conveyor gantry which spanned an oval track layout. The dump car dropped its load of 'coal' onto a bin at one end of the gantry and then was taken empty round the layout to the other end of the gantry. The gantry had a conveyer belt powered by an electric motor built in and when started carried the coal across to the other side and poured it back into the dump car. A sequence of loading and unloading could keep a kid amused for hours!!

It is featured here (be patient! It is quite an amusing sequence) https://www.youtube.com/watch?v=M0lnsYRbHYE
LC&DR says South for Sunshine
Top

Hunslet. Well done, spot on, Thats exactly it Dump wagon....... LCandDR , thank you for showing it in operation. Now guys, what gubbins do i need to make it work. john
Top

Brilliant. Thanks for posting that, very amusing. Especially the blocked line solution being to push the airline Reliant Robin [did they really use those?] into the canal. R-
All pets are therapy pets. Most are just working under cover.
Top

its a fabulous system. The last complete set was sold on ebay, germany for 42 euros. Now i know what i am looking for. Would still like to use my wagon on my layout, if anyone knows hw to make it work. The german set only worked on 3 rail trix.
Top

Almost as good as the Chops productions we're used to seeing. An excellent and entertaining video.
Top

John, the patent suggests that the tipping action is activated by an electro magnet in the track. Might be easy to rig up. Not sure what electrical gubbins you are referring to as being under the truck. Nothing in the patent drawing about a motor there. But then, the drawing does not mention the side of the truck opening as yours does. Maybe a new model? R-
All pets are therapy pets. Most are just working under cover.
Top

Rog, thanks,will play with magnets. There is a special rail in actual set, albeit, 3 rail, but that may of course include electro magnet.
Top

Hi all.
Glad the links were useful.
The Trix Twin system was not really conventional 3-rail although the tracks had three rails.
Two trains could be operated ( or three with overhead catenary) as all wheels were insulated and the centre rail was common.
Each loco had adjustable side rail pickup shoes so one loco collected current from the left rail and one from the right and could be controlled separately.
I have had a look in my "box of Trix" for a dump truck rail - no luck. Many years ago I had the complete set of conveyor, dump truck etc but sold it.
The conveyor had the usual problem of hardened belts so it is interesting to see one in operation in the video.
It is surprising what Trix items turn up - this morning I bought a "Whistling coach" set complete with controller boxed for £25. !
I need the controller for another fairly scarce item - The "Meteor" diesel 3-car express that I bought last year - boxed .
Hope you get the dump truck working .
Regards, Colin.
By the way the Reliant is a Regal Mk3 - The Robins came much later towards the end of production. The reliant works was only about 7 miles from where I live and many of my relatives and friends worked there.
Top

Hunslet, very informative, thanks. Have come very late into trix, but will look out for future purchases.
Top

Hi all.
A little more info on the Trix dump wagons.
In 1954 a special batch was produced for the American market with NMRA standard wheels and knuckle couplers.
They were sold between 1954 and 1958 by "Aristo Craft Miniatures " of New York .
They had a different chassis casting with no buffers and a larger slot for the coupler.
I have been able to obtain a couple in boxed condition - one is just the wagon and one is a wagon with the dumping mechanism as below.

This is the dumping mechanism which consists of two coils which when energised with 12-16 volts attract the metal plate under the dump wagon and cause it to dump ! 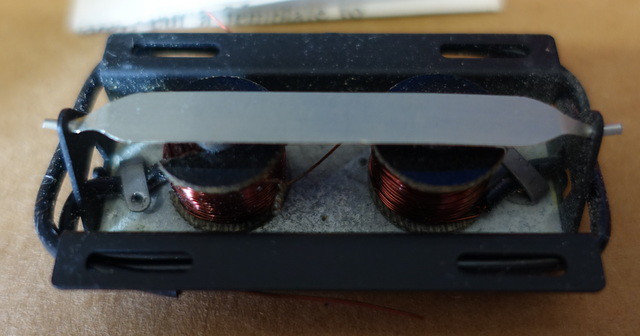 In the UK version the mechanism is mounted in a section of track but this version is for mounting in a piece of standard track either 2 or 3 rail by cutttng the sleepers and making a hole on the baseboard for the mechanism -instructions are included.

They are shown below with my fairly rare Trix switcher which again was for the American market and was only sold as a kit.

It is unusual for Trix as it is 2-rail with finer scle flanges than usual nd is 12v DC as Trix at that time used AC !

Return to “On the workbench”

Users browsing this forum: No registered users and 1 guest