Your place to show and describe in detail and with photos how you produced a specific item of modelling. Rolling stock, Building or something related.
Post Reply
6 posts • Page 1 of 1

I have been asked by a few people on here and other forums, what colours I used on Mrs PT's loco crew (I suspect it is so they can avoid the colours like the plague) so for any one on here who may be thinking of painting some crew soon and wish to avoid having them turn out like mine here is how I did it....

First off the guy with the red tie. Waist Coat and Trousers are a 85% black/15% white mix. Once dry they were given a Citadel Nulin Oil wash. His Jacket is an 85% Army Painter Wolf Grey/15% White mix. Once dry it was given a 25% Wolf Grey/75% Matt anti shine varnish wash.

If you want to dirty the bottoms of the trousers a little just mix 75% black/25%sandy Brown and dry brush until desired grubbiness is achieved.

For illustration of the difference the original % of white to base colour makes, the chap with the shovel had is trousers done as per figure 2 and jacket as per figure 1. 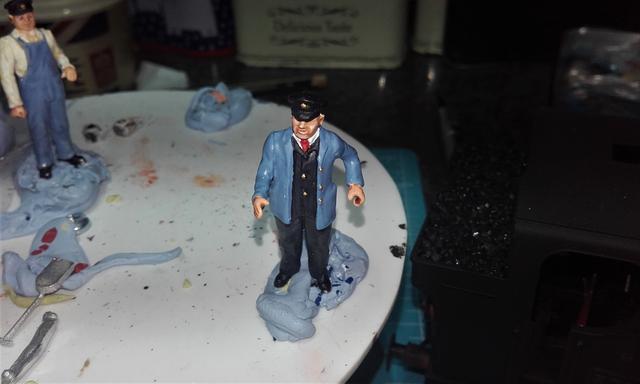 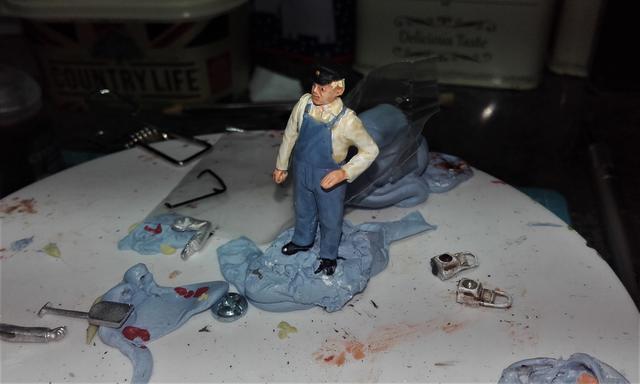 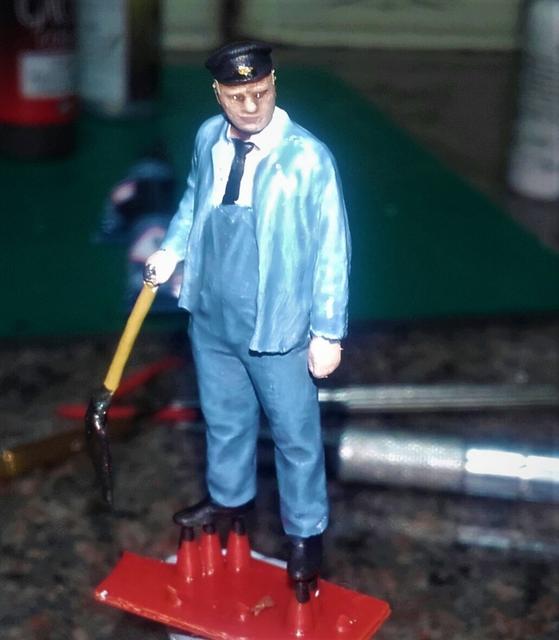 Oh, Dr Beeching what have you done?
There once were lots of trains to catch, but soon there will be none!
Top

Exceptional painting, right down to the sclera!

Perhaps you might be able to guide me- I am an American modeler with a passion for
British OO, and I am seeking an appropriate shade of that darkish, almost muddy BR
green, for a Silver Fox D6100 shell. I study the paints in the local hobby store, and
find nothing that quite replicates the shade I seek.

Could you recommend a paint, and/or manufacturer?
Top

Thank you PT. Very useful guide.
And the Lord said unto John “Come forth and receive eternal life”, but John came fifth and won a toaster!
Top

The BR locomotive green was sometimes called 'Deep Bronze Green' but there is a difficulty because as was the practice in those days the workshop paint foreman usually mixed his own colour and variations in shade were possible. A British Standard was issued (BS224) . Diesels were supposed to be painted in the same colour but the surfaces, the way paint was applied (spray or brush) and the amount of varnish could have an affect in the appearance. In the UK there are a number of manufacturers selling 'authentic railway colours' but I don't know if these are available in the US.

Beware anyone calling it "Brunswick Green" it was never as bright as that. There is a SE&CR locomotive preserved at the National Railway Museum at York supposed to be painted "Brunswick Green", and this is clearly a brighter green shade than BR livery locomotives like Ellerman Lines, Evening Star and the Brush type 2 diesel also in the Great Hall which are in BR dark green..

The Great Western used a similar shade of green to BR called Middle Chrome Green. But in some lights it could appear almost black.

The topic has been discussed at great length, see ( https://www.rmweb.co.uk/community/index ... ive-green/ )

Add to that the fading and weathering most 'green locos' suffered and poor or none existent cleaning they 'enjoyed'. Then you got locos standing next to each other in what was nominally the same livery, but looking very different.
Top

Colour of locos and rolling stock, (was Simple Crew Colours.)

At the O gauge Railway society test track meeting tonight. the topic of colour was raised. This time it was the shade of grey that BR painted their unfitted goods wagons.

Opinions were aired that the grey for ex works wagons (e.g. pristine) used by most model manufacturers was too dark. Wagons were such a light colour that it could have been white with a hint of green/blue.

In black and white photographs they do look almost white but old colour film is so unreliable it is not easy to be 100% certain. David Larkin's latest wagons book is well worth getting, it covers pre-nationalisation steel body mineral wagons. (see pages 60, 88 and 122)

Weathered wagons were different of course, soot and grime tended to darken the colour and then rust takes its toll.

What do YOU think?
LC&DR says South for Sunshine
Top
Post Reply
6 posts • Page 1 of 1

Users browsing this forum: No registered users and 2 guests